by NINA NGUYEN – PRIME Minister Scott Morrison has pushed back at claims that Australia broke trust with the US when it delayed informing Labor about the AUKUS negotiations, arguing Labor MPs couldn’t be trusted due to their cosy relationship with communist China.

It comes after reports emerged on Saturday that the Biden administration has entrusted the Liberal prime minister to secure bipartisan support from both the Coalition and Labor for the deal.

The Labor Party’s deputy leader, who would have been sitting in briefings, had frequent flyer points for visiting the Chinese embassy. 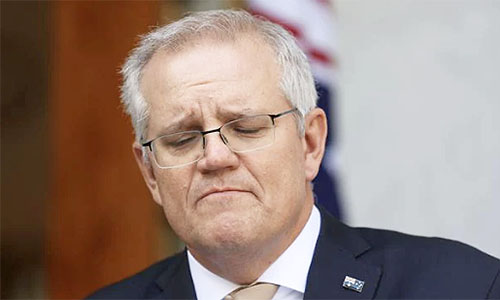 The AUKUS agreement seeks to enhance the security partnership between Australia, the US and the UK, and is expected to strengthen a regional alliance to combat Beijing’s growing influence in the Indo-Pacific.

The agreement also marks the first time the US has agreed to share its nuclear submarine technology since bringing in Britain in 1958.

It has been alleged, however, that Labor was briefed about the pact one day before it was announced in mid-September 2021.

Mr Morrison has described the claim as “absolutely false” and stressed that his government “understood absolutely what the requirements were and we met them 100 per cent”.

“AUKUS is one of the most secure and highly confidential agreements the Australian Government had entered into since ANZUS,” he said.

“We absolutely complied with all of the issues that needed to be addressed in forming that partnership, and the policy did receive bipartisan support.”

Mr Morrison also flagged the opposition’s close relationship with the Chinese government, arguing Labor might have leaked information about AUKUS if informed earlier.

“I find it passing strange that you think we wouldn’t have maintained the absolute discretion, as we did with so many of our own cabinet.”

“I mean, we’ve only seen it highlighted over the course of the last couple of weeks – you’ve got the deputy leader of the Labor Party, who would have been sitting in such a briefing, who had, you know, frequent flyer points for visiting the Chinese embassy in Australia.

The PM further noted that the government had gone through 18 months of “painstakingly working through incredible detail, incredibly sensitive” and “highly confidential” issues under AUKUS, and the pact isn’t something he “was going to be loose with”.

“AUKUS is a ground-breaking agreement, the most significant defence security agreement Australia has entered into in 70 years. And I was not going to risk that on the Labor Party,” he said.

“Previous Australian prime ministers and governments have tried and failed. I was not going to fail.”

His comments were echoed by Defence Minister Peter Dutton who said the deal “wouldn’t have gone ahead” if the US had conditioned the pact on “there being a briefing” for Labor.

Opposition Leader Anthony Albanese has denied the possibility that Labor would leak confidential information about the agreement if it had been consulted earlier while criticising Morrison for leaking text messages from French President Emmanuel Macron.

“Labor laid the foundations for the US alliance during the Second World War when Australia turned to Labor in its darkest hour. We have been supporters of the US alliance ever since,” Albanese said.PC

MAIN PHOTOGRAPH:  Scott Morrison. (courtesy DW)
RE-PUBLISHED: This article was originally published by The Epoch Times on May 16, 2022. Re-used with permission.

Does Morrison want to lose?

1 thought on “‘Leaking’ Labor a risk to Australia’s security”