ONE Nation is seeking to remove ‘confused’ Coalition MPs from federal parliament as Pauline Hanson preferences Labor ahead of hard-Left Liberals. 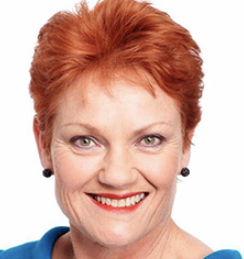 The move was announced after the Prime Minister preferenced Senator Jackie Lambie ahead of One Nation in the Tasmanian senate race, despite Ms Lambie’s track record of voting against his government.

One Nation leader Pauline Hanson, in response, accused PM Morrison of “dealing with the devil”.

“We’re not letting them get away with this dirty deal with the devil,” Senator Hanson said.

“One Nation will now look at Liberal-held seats across the country.”

Although One Nation will act against Liberal “moderates” by preferencing Labor above them, it has pledged to support Liberal conservatives and Nationals over ALP candidates.

According to The Australian newspaper, Senator Hanson’s supporters could be a significant decider in a number of electorates on May 21, with One Nation polling at above three per cent in the latest Newspoll.

“Liberal voters will be despairing as their Party lurches to the Left on issue after issue in a betrayal of Australian values,” Ms Hanson said.

“Tasmanian voters won’t be fooled and will very likely kick the Liberals out anyway. The Liberals stand for nothing!

“Labor is rotten to the core but the Liberals are just as bad because they only pretend to fight for conservative Australian values.”

The Australian Monarchists League this week published a list of pro-republican Liberals and has suggested its extensive membership take action against them.

“It’s important that monarchists do their best to ensure that candidates elected to the federal parliament are not republicans,” AML National Chair Philip Benwell said.

Has PM forgotten his ‘forgotten people’?

“This is particularly so as far as Liberal and National Party candidates are concerned – as any Labor MP must support a republic or face disciplinary consequences.

“Official Labor policy is to remove the Crown from the Australian Constitution even though, as members of the parliament, they have (falsely) sworn to ‘be faithful and bear true allegiance to Her Majesty Queen Elizabeth, Her heirs and successors according to law’.”

Admitting Labor to be a lost cause, Mr Benwell is exerting extreme pressure on Coalition MPs.

“We are concentrating on Liberal candidates and have published a list of them on our website covering most electorates around the country.

“It’s important that we speak out and not just blandly allow more and more republicans to be elected to parliament.” PC

The evil agenda of ‘moderate’ Liberals

Morrison’s policies in lockstep with Greens