The former MP for Mackellar was scathing of Mr Kean’s June 21 budget describing it as anti-conservative in an interview on Paul Murray Live this week. 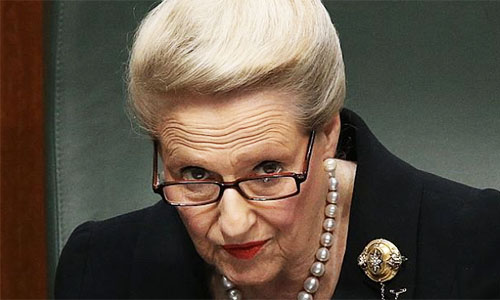 “How on earth can you have somebody who says they’re a Liberal introduce a new tax,” Ms Bishop said in retaliation to NSW’s new home-owners tax.

“It reminded me that Premier Perrottet’s advisor and confidante is [former Labor PM] Paul Keating who, of course, was the master of giving us new taxes.

“It worries the living daylights out of me that we can have a treasurer like Matt Kean, who is so far Left I don’t think he could spell Liberal.

“A one-off stamp duty is paid at a point of time when the value of the land is fixed. But under this system home owners will pay forever.”

“When I listened to that budget come down today with more spending, this pretence about the cost of living is just so false.

“Because the size of your wage, what matters, is what you can buy with it.

“These poor people who have been given a 5.2 per cent increase in their wage because of a slip-of-the-tongue by Mr Albanese, they think it’s terrific – and it is terrific.

“But what will happen is, the pressures that will come to bear plus all these other taxes – both in NSW and in Queensland – they could well find themselves where the increased money will buy them less.

Ms Bishop warned that Green taxation and energy policies – as pushed by the NSW Treasurer – were dangerous.

“Socialists want to tear down the existing society,” she said. “This is what they do.”

“They destroy society. If you take it to the extreme you end up with [Cambodia’s Khmer Rouge revolutionary] Pol Pot who killed anyone who didn’t agree with them or had any education that remembered their past – that remembered the sort of society they had.

“The Greens simply don’t want the nation State of Australia.

“They want to see international government – the socialist international regime of which they will be a part and will order your life and tell you what to do and what you may or may not do.

“That’s their idea. And don’t forget that the other aim of the Greens is to reduce the number of humans in the planet.

“So if you have to starve them to death – or get rid of people in any other way – that’s their absolute aim.”

“What really makes me angry is that conservative governments for the past 10 years had the opportunity to stop subsidising so-called renewables,” Ms Bishop said.

“And to put an end to this farce that it is supposed to be cheap.

“If that had happened and the market had really worked, you’d have gas and coal competing and you’d have a good balance in the market.

“The reality is that up to 80 per cent of everything we use – that keeps out lights on, that keeps our bath water hot, that gives us a hot cup of tea, whatever – comes from fossil fuels.

“It’s here to stay. In Europe they’re re-opening their coal-fired power stations. China uses our coal and our iron ore to make battle ships with which they want to conquer us.

“And we are sitting here saying we can’t have gas in Victoria.

“It makes me so angry that we had the opportunity to do something and we did nothing.”PC

We had 10 years to do good, and we did nothing…

Planet of the Hoax: Greens betrayed by heroes